sns_red_curtain so others can find
4 ] “I stood still, vision blurring, and in that moment, I heard my heart break. It was a small, clean sound, like the snapping of a flower's stem.”
5] Comment for password 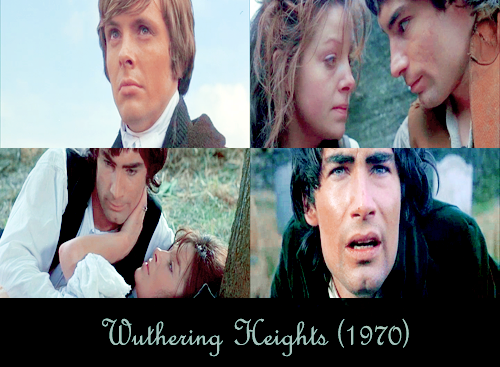 sns_red_curtain so others can find.
4 ] Join

wuthering_heigh
5 ] A passion. An obsession. A love that destroyed everyone it touched.

I found a copy of this black and white version starring Ian McShane as Heathcliff and Angela Scoular as Cathy and I made screencaps of all 4 episodes.
http://www.imdb.com/title/tt0273399/combined Wuthering Heights at the Venice film festival: 'It's been a very difficult journey'

(I hope this is allowed. Because this community hasn't been updated in awhile...) Some adaptations of classic literary go for sumptuous decor and costume, emphasising the general gorgeousness of the houses, the skirts and the bonnets of yesteryear, and involve Judi Dench in some capacity. Then there's Andrea Arnolds' Wuthering Heights, which keeps its gaze firmly on the skies and hills, throws on whatever clothes come to hand and doesn't feature anyone you'll recognise.

( •"They DO live more in earnest, more in themselves, and less in surface, change, and frivolous external things. I could fancy a love for life here almost possible; and I was a fixed unbeliever in any love of a year's standing." )

sns_red_curtain for updates and members only entries
++ Comments are love. Leave them at

sns_red_curtain so I can keep track of them
++ Textless icons are not bases.
++ screencaps by me can be found at

Wuthering Heights has given rise to many inspired works, mainly due to its powerful literary themes, and of course, to its controversial and often debated upon tragic anti-hero Heathcliff. We’ve seen similar tales in literary history possibly inspired by the classic dark Romanticism, including Harry Potter (Severus and Lily), Twilight, The Phantom of the Opera (Erik and Christine), The Village (Ivy and Noah), etc. A lesser known tale is not human at all, but the bittersweet tragedy of Nyasu from the Pokemon anime. sns_red_curtain so others can find.
4 ] Join

wuthering_heigh for more
5 ] A passion. An obsession. A love that destroyed everyone it touched.

The italian version of  "Wuthering Heights". Three and a half hours of watching time. AN excellent adaptation of Emily's Bronte novel with a great cast that simply fits the part. It was made for tv in two parts and if you watch this you will find yourself absolutely absorb in the story no matter how mny times or versions of "Wuthering Heights" you have watch.

It is in italian and I have only found subtitles in spanish, russian and french, but if you master any of this languages it worth watching.Plus, Allessio Bonni as Heathcliff is really hot.

You can find it here, you just need to register

Check out the imdb page for more info: here

The earliest known film adaptation of Wuthering Heights was filmed in England and directed by A. V. Bramble. It is unknown if any prints still exist. The most famous was 1939's Wuthering Heights, starring Laurence Olivier and Merle Oberon and directed by William Wyler. This adaptation, like many others, eliminated the second generation's story (young Cathy, Linton and Hareton). It won the 1939 New York Film Critics Circle Award for Best Film and was nominated for the 1939 Academy Award for Best Picture.


The 1970 film with Timothy Dalton as Heathcliff is notable for emphasizing that Heathcliff may be Cathy's illegitimate half-brother. This is the first colour version of the novel, and gained acceptance over the years though it was initially poorly received. The character of Hindley is portrayed much more sympathetically, and his story-arc is altered.

The 1992 film Emily Brontë's Wuthering Heights starring Ralph Fiennes and Juliette Binoche is notable for including the oft-omitted second generation story of the children of Cathy, Hindley , and Heathcliff.

Adaptations which reset the story in a new setting include the 1954 adaptation by Spanish filmmaker Luis Buñuel set in Catholic Mexico, with Heathcliff and Cathy renamed Alejandro and Catalina, and Yoshishige Yoshida's 1988 adaptation which set the story in Tokugawa period Japan.

( Collapse )
In 2003, MTV produced a poorly reviewed version set in a modern California with the characters as high school students.

The novel has been popular in opera and theatre, including operas written by Bernard Herrmann, Carlisle Floyd and Frédéric Chaslin (most of which like many films cover only the first half of the book) and a musical by Bernard J. Taylor, as well as a song by Kate Bush.

In autumn of 2008, Mark Ryan launched a dramatic musical adaptation of the novel, narrated by Beowulf and Sexy Beast star Ray Winstone. He composed, sang and produced the tracks with Robb Vallier who also worked on Spamalot. He also directed the video for the song "Women" filmed especially for the website and featuring Jennifer Korbee, Jessica Keenan Wynn and Katie Boeck.